WARNING: text heavy post ahead. It happens.
Do you guys remember when TLC was just Trading Spaces? Like, they had no other show. It was just Trading Spaces. Back when Paige Davis’ voice didn’t quite yet make you want to stab someone, and way before SOMEONE was having 19 kids . I can remember exactly when I started questioning the morality of TLC. It was during an episode of Trading Spaces. The home owner’s ONE request was that they not paint her beautiful wood furniture that happened to be a family heirloom. And without a moments hesitation the designer painted it all. white. (Not to mention, he designed the entire room to look like the inside of a blue train car. Like, what purpose does a room that is painted entirely blue and white and resembles a train car serve? “This is our dining room, and this is our guest room, oh! And this is our train car room. Because we can’t afford vacations so some times we just come and sit in here and pretend we’re traveling through the Swiss alps”. Mmm I think not.)
Well then TLC had a show that documented couples and their pending children. A full half hour chronicling the preparation, birthing, and bringing home of your newborn. This is starting to feel a little too personal.
Then it was Little People. Big World. Okay, hopefully this isn’t too socially reprehensible to say but, It’s the only size they know, so is it actually big? It’s really more like Little People. Regular world. And now I’m just starting to feel morose because why are we documenting this? They have a genetic mutation they makes them really small, so we’re filming their life.
And then they had a show about kids with Progeria. In case you aren’t familiar with Progeria, this is what someone with Progeria looks like: 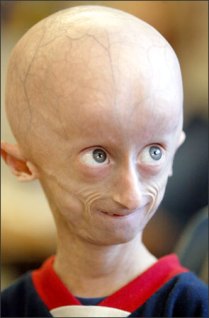 It’s a disease that makes you age obscenely rapidly, and most children don’t live past the age of 13. It’s a show about CHILDREN. WHO. ARE. DYING. Like, who thought this was okay??
Which brings us to, the Worlds. Tallest. Children. ‘Cause TLC has a show about them now too. In case you don’t remember what adolescence was like I’m gonna give you a quick refresher course. If you are different, especially if you are physically and abnormally different, you. will. be. mocked. So let’s take some kids who just don’t get stared at enough, and let’s put them in front of millions of people.
TLC is like the stage mom for people who are already really fucked up. Like, hey! how can I exploit you and make money off of you all while showcasing your face to millions of people?! Basically, if TLC deems you unusual or unfortunate enough, they’re gonna come in with their cameras and their narrator, and they’re gonna rape the shit out of your life. So if you have a terminal illness, crazy religious views, or in general are going through something that only your closest kin should be a part of, answer the phone, it’s probably TLC.

2 thoughts on “TLC is a life molester”