Truths I’ve come to know as a barista:

On Starbucks:
You may order in Starbucks lingo. Unless you’re an ass about it. Did you order a grande latte? No big deal, I know what that is. Sure, it takes me a couple seconds to remember “venti” is 20 ounces and sure, I’d prefer you ordered with the sizes listed on my menu but if you’re nice it. really. doesn’t. matter.

I am not at war with Starbucks. In fact, I don’t even feel in competition with them. They are a very large business doing a lot of things I’m not doing. People go to Starbucks. I go to Starbucks. People I know who are particularly fond of speciality coffee and spend much of their energies focused on coffee go to Starbucks. It’s no longer a business known for it’s quality coffee but it’s a business useful to people who are traveling or who enjoy hot chocolate. Would I love Starbucks to use it’s Big Coffee powers to ensure coffee farmers are treated fairly and to insist the quality of coffee be top notch? Absolutely. I’d also love McDonald’s to demand meat-packing plants train their employees properly and pay them appropriately for their dangerous jobs. And organic? Yeah, that’d be cool too.

My only real complaint about Starbucks would be the type of customers it has taught people it wants. Know how to order your drink the way we want to write it down. So when you march into my cafe and respond to my greeting with “triple venti restretto caramel macciato, 140 degrees, no whip” I think you’re a tool. Mostly because I just asked you how your day is. I don’t mind that that’s your drink, just be nice about it, k?

On coffee snobs:
You know the quickest way to let someone know you’re not a coffee snob? Tell them you’re a coffee snob. I know some coffee snobs. Most of them are really nice people who will admit single-origin coffee warms their hipster little hearts but when asked if they’re a coffee snob they get kind of bashful and apologetic. “Snob” is an ugly word and they just like good coffee. There is nothing ugly about that.

This is a cute owl drinking coffee.

Something that is ugly? Telling your barista you’re a coffee snob and then thinking that gives you the right to be a jerk about your coffee. I can’t recall a single customer who came in, told me they are a coffee snob, and ordered something other than a really large white chocolate mocha. Then made a face while deciding if they were going to complain about it or not. Do you like your coffee a really specific way? Awesome, me too! Let me know what it is I can do so that the coffee I’m making for you is your favorite. Because seriously, I love winning. And giving you a product you don’t love benefits me nothing at all. Help me help you. And don’t be a snob about it.

On tipping:
Before I was a barista I was a shitty tipper. At least to baristas. Part of me is sad about this because I had friends who were baristas whom I didn’t tip well! But part of me recognizes I just didn’t know. Most people who are nice and don’t tip, I have no hard feelings for. They probably just don’t know. You don’t know what you don’t know and I can’t hold that against you. But let’s say you do know. Let’s say you’re a regular and I know your drink and you see other people tipping every day and you know this is a thing you should do. But let’s say you’re also really friendly and you make my mornings brighter and by God, you’re so polite. I could count this as your tip. I can’t speak on behalf of other baristas, but if you make me laugh- I will gladly forgo that dollar because laughing is so much better than a dollar.

I know the “tipping” argument is vast and has been argued many times, and honestly I’m not educated enough on the matter to know if it’s something that should continue or not but I do know that as a minimum wage worker, tips are really really helpful. If you tip and you’re super nice? Your barista probably loves you.

On drinks:
Before I was a barista I was insecure about my drink orders. Was my barista judging me?? No, I don’t think they were. Upon becoming a barista I quickly realized I don’t care what people drink. Do I make jokes with my friends about customers who order 20 ounce iced soy cappuccinos? I do. But not because I’m judging you on your drink order. Because it’s funny when people order things that aren’t real. And it’s funny how often it happens. I imagine it’s the same in most industries. When you’re in the industry you understand parts of it outsiders don’t, so in order to keep some semblance of sanity you joke with the other insiders. All that to say, I want to make you the drink you want. I might have to ask you a few more questions to make sure I’m understanding what you want because even though you said cappuccino, it isn’t what you meant. I’ll try not to be a jerk as I tell you that.

It’s then your turn to not be a jerk while I ask you questions. Thank you, kindly.

On talking to your barista:
Do this.
Sometimes it’s awkward. It’s okay!
I’ve been plenty guilty in the past of responding to “hi, how are you?” with “can I get an iced americano?”. And then I feel like a jerk and awkwardly fumble over my words as I then answer their question and respond in kind. Awkwardness is cool. Let your barista know they were heard. Treat them like a person. Are you having a tough week? Are you dating someone new? Is your mom driving you batty? Guess who wants to talk about this. Your barista! Okay, probably not every barista, but I’d be willing to bet most of them really do want to talk about your shit. Making coffee is cool and all, but talking with people is better. My only caveat would be, don’t be solely negative. If your LIFE is going terribly and your wife left you and your son is a drug addict and you might be gay, you aren’t sure- you have my sympathies. But if all you have are complaints I clam up real quick. You’re barista probably loves to listen to you but also is not a magical problem-fixing genie or a wasteland for your emotions. Please leave your dark cloud at the door. But also (I hope you saw this coming) if you’re really nice about it, your dark cloud can have a little more room. 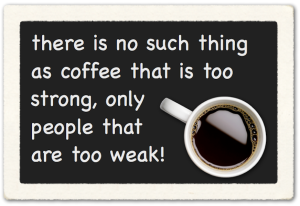 Is your coffee joke kind of mean?